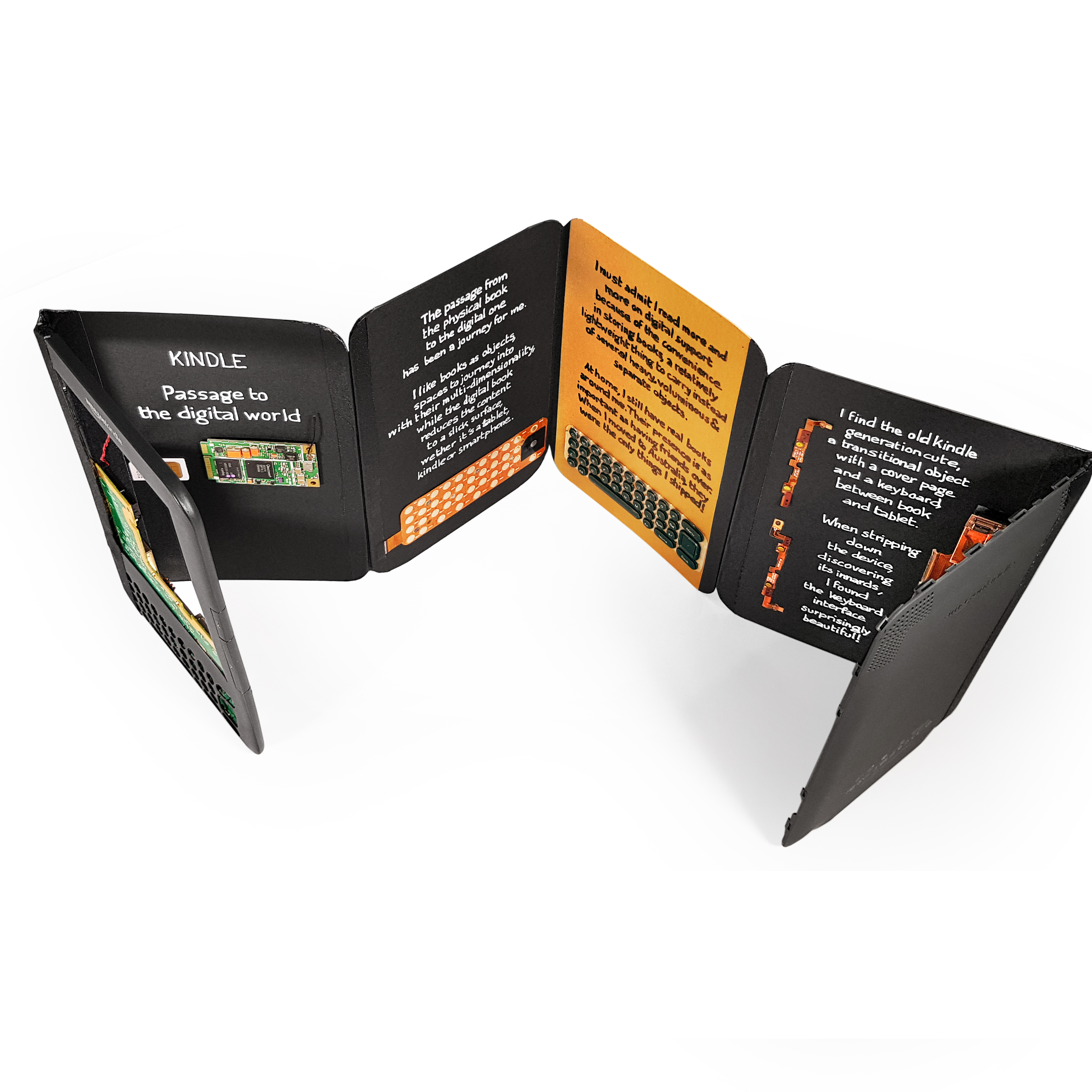 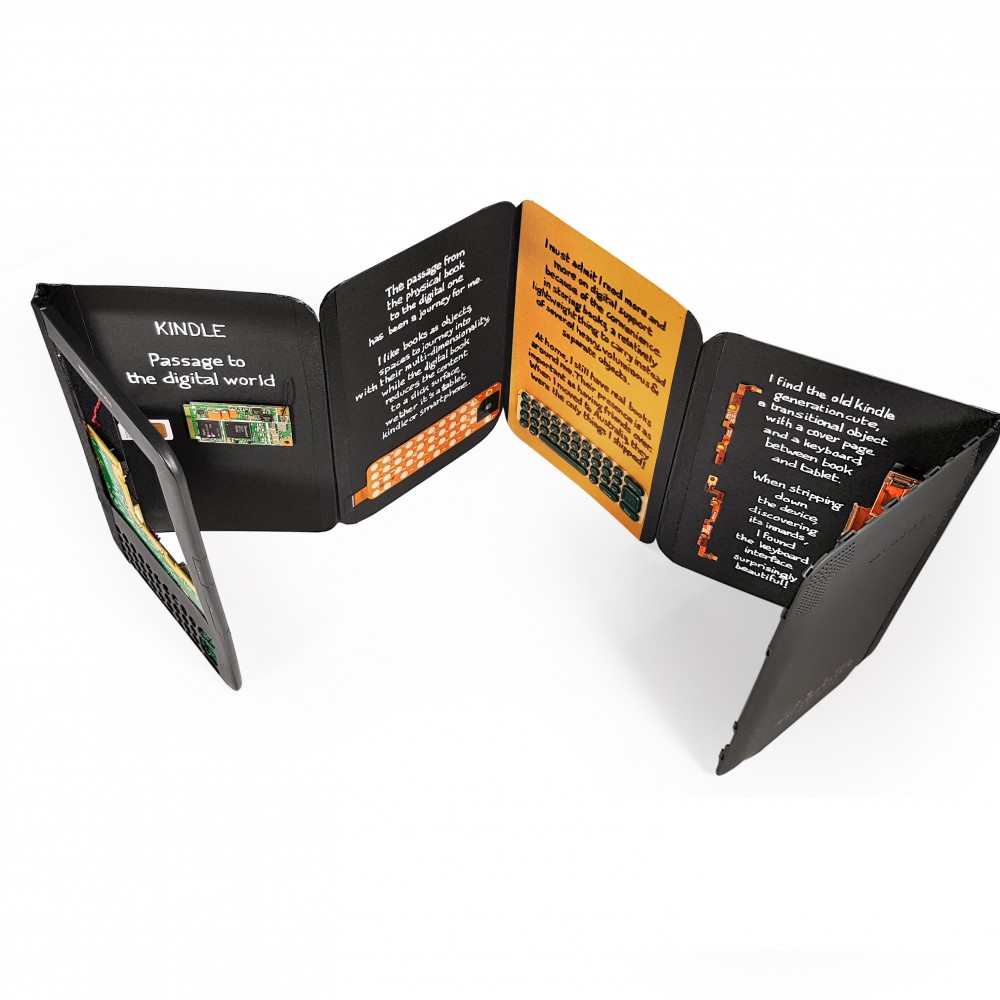 I recently had the opportunity to view the ABBE 2020, Artists Book Exhibition Fair held at The Edge, State Library of Queensland, November 13-14, 2020. I was celebrating with my friend and colleague Suzon Fuks, who was an exhibiting artist with her series of books titled Obsolete. This series is comprised of books made entirely from all kinds of electronic devices such as laptops, tablets, digital cameras and smart phones. Although my focus is usually on antiquarian books, I delight and am intrigued by contemporary artist books and the ways they engage traditions of book culture while pushing those same lineages in subtle and engaging ways. I am not at all expert in the critical language within the maturing field here in Australia, but I do look at a lot of books and consider their aesthetics as a daily practice.

Suzon Fuks’ artist books are arresting. Her use of non-traditional materials does more than push boundaries: they leap them altogether, setting up camp on the other side. As a traditionalist I admit I am unsettled by Fuks’ work. Yet in contemplating the reasons for my discomfort, engaging with Suzon about them, and by returning to the books through her photographs, I find myself willing to meet her fundamental provocations. For Suzon Fuks is nothing if not a provocateur; she continually finds considered and idiosyncratic artistic expressions to shake things up and dispel complacency in her audiences and the consumers of her art. 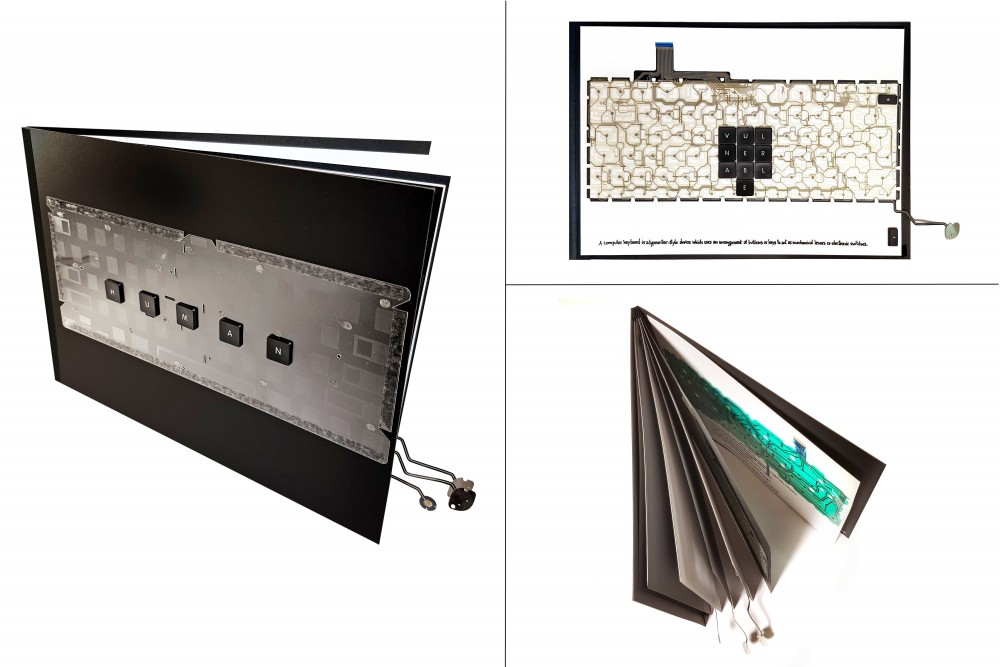 There were three main types of books on Suzon’s table at the 2020 exhibition/fair. Some were created from discarded aluminium trays – the sort that one might find in a bain-marie – and were concerned with waste and nourishment. These she simply calls Cook Books. The rest were comprised of digital detritus and I found them more challenging and perhaps therefore most compelling. Existing as a distinct subset within this group were a cluster of books that she has collectively titled Phones that Smart. Leaving Cook Books for another time, here I wish to record some of the responses and thoughts I had about the books made from digital devices.

The oblong cover of the first book I contemplated had five typewriter keys placed horizontally across its centre, spelling the word “H U M A N”. Within its hard dark covers I found tenderly displayed electronic circuitry from stripped down devices floating above and contrasting with solid, organic hand lettered text. I paused to meditate for a moment on the facts gleaned from the book itself, that humans started using symbols to communicate words and concepts about 8,000 years ago. The hand lettered text in this series is sparse, giving the statements time and space to land: we are the most advanced species intellectually, technologically, and emotionally…[but] humans also have the capacity to engage in primitive, violent, cruel, and self-destructive behaviour. Despite our advances, or perhaps as a result of them, we have inadvertently created a turning point in the history of life on Earth.

As I continued to look at this and other books in the series, I reflected on the expansion and acceleration of human communication over time - how far we have come in those 8,000 years from clay to papyrus to vellum to paper to computers and smart phones. And where are we going now? Contemplating the books, I followed thoughts of a future where human horizons condense into the evermore complex, compact and delicate circuitry of Artificial Intelligence. I returned to the first cover with its three-dimensional lettered keys and asked myself: What is it to be H U M A N? Fuks answers the question in her web presentation of the books What makes us HUMAN? Being able to symbolise, as well as make, use and develop tools.

As an artist, activist and provocateur, Fuks is concerned with themes of waste, of the obsolescence of ‘things’ - especially ‘devices’ - with rapidly diminishing resources, particularly the minerals required to power our devices, and ultimately with the potential obsolescence of the entire human race. In her world view humans - and the planet we inhabit - are extremely vulnerable, and our obsolescence is something to be resisted. Obsolete, as a collection of artist’s books, both heralds and resists this bleak future. It is a clarion call to action.

With Phones that Smart, Fuks has created a collection of concertina books made from stripping mobile phones. This subset within the Obsolete series continues the call to action that began with the others. Each of these twelve books has a theme, ranging from definitions to environmental facts; from sustainability to planned obsolescence; from production to recycling to the disparity between those who can and cannot access mobile devices at all. As Fuks explains on her website, “This work is made to encourage people to use their phones as long as possible and recycle them, and to be aware of the disparity of access to Internet, communication and electricity.” Collectively these books are visually striking with their sharp edges, cracked faces and geometric snaking across the table. Together they face the viewer like a small delegation charged with asking questions and demanding answers.

Phones that Smart – all 12. Obsolete Series by Suzon Fuks

It should come as no surprise that Fuks was listening to the audiobooks of public intellectual and ‘Big History’ historian Yuval Noah Harari as she pulled apart and repurposed these phones. But where Harari appears to have an “almost nihilistic composure about human suffering" 1, Fuks is concerned with igniting in her audience a sense of individual capacity and our responsibility towards preserving that which makes us human. If in Obsolete she makes a call for action, then in Phones that Smart she makes explicit a simple pathway of resistance: repair and recycle your mobile phone. She seems to be saying, here is something you can do. Phones last up to seven years. If we resist the invitation to change every two years, we can prevent a lot of plastic ending up in landfill.

In a follow-up conversation with Suzon after the exhibition I discovered that Obsolete is the overarching title for a body of work that includes not only artists books but also a solo physical performance that is currently in development. Human obsolescence is a concept Fuks has been creatively engaging with since Stelarc’s  statement that the human body is already obsolete.

"The body's LACK OF MODULAR DESIGN and its overactive immunological system make it difficult to replace malfunctioning organs. It might be the height of technological folly to consider the body obsolete in form and function, yet it might be the height of human realisations. For it is only when the body becomes aware of its present position that it can map its post-evolutionary strategies.

It is no longer a matter of perpetuating the human species by REPRODUCTION, but of enhancing male-female intercourse by human-machine interface. THE BODY IS OBSOLETE. We are at the end of philosophy and human physiology. Human thought recedes into the human past."2

Suzon wants to resist Stelarc’s proposition that bodies need more and more “addenda” to remain viable. Alternatively, she finds hope in Yuval Noah Harari’s suggestion that while humans need to be aware we are creating our own obsolescence, the path forward is to embrace what makes us uniquely human. “We need to dig into the knowledge of ourselves and our bodies – our senses and perception are what we have that makes us very special” (Fuks, in conversation, Jan 13, 2021).

There is something at once delicately tender and strictly uncompromising about Fuks’ sculptural books. I am challenged by their hard edges, inflexible pages, lists of uncomfortable facts, quotes that herald a future devoid of sensuality; a future that is hard-wired. I’m a paper and ink girl, deeply conservative in my aesthetic tastes when it comes to books and binding. Nevertheless, to engage with Obsolete and Phones that Smart is to experience something conceptually fresh and unusual – books made from stripping back the very devices that were once understood to be making the book itself obsolete. Moreover, it evokes a beauty that is usually hidden away and “off limits”; a reminder that the days of smart devices are sharply numbered; an invitation to consider radical acts of repair, re-use and re-purposing. In the end, to engage with her work as a whole is to reflect on some of the things that make us human – our senses and our capacity to feel. To feel uneasy is precisely the point. Especially if discomfort leads to collective action and action leads to real and lasting change.

Dawn Albinger is an antiquarian bookseller, book huntress and co-owner of Archives Fine Books. She also has a decades long contemporary performance practice and history of collaboration with Suzon Fuks. You can discover more about Dawn’s performance practice at http://www.ladyfinger.com.au/